World War 2 Supermarine Spitfire fighter plane - Auckland War Memorial Museum, Auckland New Zealand. Air Chief Marshal Sir Keith Rodney Park of Thames, New Zealand was instrumental in having this fighter bought to the war memorial museum in Auckland. Keith Park was in tactical command during two of the most significant air battles in the European theatre in the Second World War, the Battle of Britain and the Battle of Malta. 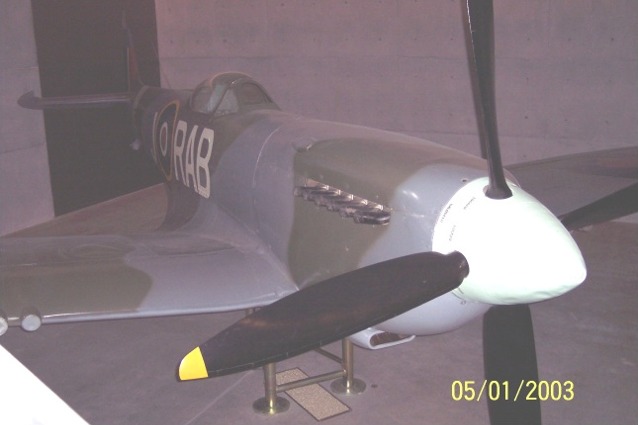 The Supermarine Spitfire was a single seat fighter used by the RAF and many Allied countries in World War II.

The Spitfire's elliptical wings gave it a very distinctive look; their thin cross-section gave it speed; the brilliant design of Chief Designer R.J. Mitchell and his successors (he died in 1937) meant the Spitfire was loved by its pilots. It saw service during the whole of World War II, in all theatres of war, and in many different variants.

More than 20,300 of all variants were built, and Spitfires remained in service well into the 1950s.

Supermarine Chief Designer R.J. Mitchell had won three Schneider Trophy seaplane races with his aircraft, by combining powerful Napier or Rolls Royce engines with minute attention to streamlining. These same qualities are equally useful for a fighter design, and in 1930 Mitchell produced such a plane in response to an Air Ministry request for a new and modern monoplane fighter.

This first attempt at a fighter resulted in a open-cockpit monoplane with gull-wings and a large fixed spatted undercarriage. The Supermarine Type 224 did not live up to expectations; nor did any of the competing designs which were also deemed failures.

Mitchell immediately turned his attention to an improved design as a private venture, with the backing of Supermarine owners Vickers. The new design added gear retraction, an enclosed cockpit, oxygen gear, and the much more powerful Rolls Royce PV-12 engine.

By 1935 the Air Ministry had seen enough advancement in the industry to try the monoplane design again. They eventually rejected the new Supermarine design on the grounds that it did not carry the required eight-gun load, and didn't appear to have room to do so.

Once again Mitchell was able to solve the problem. It has been suggested that by looking at various Heinkel planes he settled on the use of an eliptical planform, which had much more chord to allow for the required eight-guns, while still having the low drag of the earlier, simpler wing design. Mitchell's aerodynamicist, Beverley Shenstone, however, has pointed out that Mitchell's wing was not directly copied fron the Heinkel He 70, as some have claimed; the Spitfire wing was much thinner and had a completely different section. In any event, the elliptical wing was enough to sell the Air Ministry on this new Type 300, which they funded as F.10/35.

The prototype first flew on March 5, 1936. Performance was such that the Air Ministry immediately placed an order for 310. At the time it was still being "shaken out" by Vickers test pilots, even before the aircraft had been handed to them for their own flight testing.

A feature of the final Spitfire design that has often been singled out by pilots is its "washout" feature, which was unusual at the time. The incidence of the wing is _2º at its root and -½º at its tip. This twist means that the wing roots will stall before the tips [1] (http://www.fly-imaa.org/imaa/hfarticles/const/v1-4-10.html), reducing the potentially dangerous rolling moment in the stall known as a spin. Many pilots have benefitted from this feature in combat when doing tight turns close to the aircraft's limits.

There were 24 marks of Spitfire and many sub-variants.

There also was a naval version of the Spitfire called the Seafire. It was especially adapted for operation from aircraft carriers: with an arrester hook, folding wings and other specialised equipment. However, like the Spitfire, the Seafire had a narrow undercarriage track, which meant that it was not well suited to deck operations, and had a very high accident rate.

The name Seafire was arrived at by collapsing the longer name Sea Spitfire.

The Spitfire is often credited with winning the Battle of Britain. The aircraft, and Mitchell, were lauded in the (somewhat inaccurate) movie "The First Of The Few". It certainly must be considered one of the finest aircraft of the war... and possibly the most beautiful. But how did it compare with the Hawker Hurricane (that the RAF used in greater numbers at that critical stage in 1940), or with its counterpart in the German Luftwaffe, the Messerschmitt 109? The Hurricane's guns were better suited to attacking bombers, but the close pattern of fire and slow speed made the Hurricane a bad choice for attacking the German fighter protection. The Spitfire, on the other hand, was in most respects the close equal of the Me109 but had some attributes that helped "Spits" to win many "dog fights"... most often quoted is manoeuvrability but good cockpit visibility was probably a greater factor. Nonetheless, seven in every ten German planes shot down during the Battle of Britain were victims of Hurricane pilots. The mini-series Piece of Cake depicted the life of a spitfire squadron during this period.

The Spitfire Mk. XI flown by Sqn. Ldr. Martindale, seen here damaged after its flight on 27 April 1944 during which it achieved a true airspeed of 606 mph.During the spring of 1944 high speed diving trials were being performed at Farnborough to investigate the handling of aircraft at near the sound barrier. Because it had the highest limiting Mach number of any aircraft at that time, a Spitfire XI was chosen to take part in these trials. It was during these trials that EN 409, flown by Squadron Leader Martindale, reached 606 mph (Mach 0.89) in a 45 degree dive. Unfortunately the aircraft could not cope with this speed and the propeller and reduction gear broke off. Martindale successfully glided the twenty miles back to the airfield and landed safely.

On 5 February 1952 a Spitfire Mk. 19 of No. 81 Squadron RAF based in Hong Kong achieved probably the highest altitude ever achieved by a Spitfire. The pilot, Flight Lieutenant Ted Powles, was on a routine flight to survey outside air temperature report on other meteorological conditions at various altitudes in preparation for a proposed new air service through the area. He climbed to 50,000 feet (15,240 m) indicated altitude, with a true altitude of 51,550 feet (15,712 m), which was the highest height ever recorded for a Spitfire. However the cabin pressure fell below a safe level and, in trying to reduce altitude, he entered an uncontrollable dive which shook the aircraft violently. He eventually regained control somewhere below 3,000 feet (900 m). He landed safely and there was no discernible damage to his aircraft. Evaluation of the recorded flight data suggested that in the dive, he achieved a speed of 690 mph (1,110 km/h) or Mach 0.94, which would have been the highest speed ever reached by a propeller driven aircraft. Today it is generally believed that this speed figure is the result of inherent instrument errors and has to be considered unrealistic.

Following World War II, and well into the 1960s the Spitfire remained in use with many air forces around the world, including the Egyptian Air Force, Irish Air Corps, Israeli Air Force, Syrian Air Force, Danish Air Force and Turkish Air Force.

The Royal Norwegian Air Force operated 2 squadrons of Spitfires (331 and 332) during a large part of the Second World War. They were financed by the exiled Norwegian government (both planes and running costs) and manned by Norwegian pilots (trained in Canada). Several times they achieved a higher kill ratio (and higher losses) than the RAF. After the war the Spitfire remained in service with them into the fifties.

Planes remaining in use

Many Spitfires and a few Seafires remain airworthy and many aircraft museums treasure static examples of this graceful yet lethal fighter. The RAF maintains some for flying display and ceremonial purposes in the Battle of Britain Memorial Flight at RAF Coningsby in Lincolnshire.

A black-painted Spitfire, which belongs to Israeli pilot and former president Ezer Weizmann is still in active flight condition. The Black Spitfire is on exhibit in the Israeli Air Force Museum in Hatzerim and used for ceremonial flying display.