Auckland Skytower from Princess Warf. To the right out of sight sits the KZ1 racing yacht and the Viaduct Harbour where New Zealand hosted two America's Cup campaigns.

We also have a cameo appearance by Bart Simpson who was holidaying in Auckland at the time. 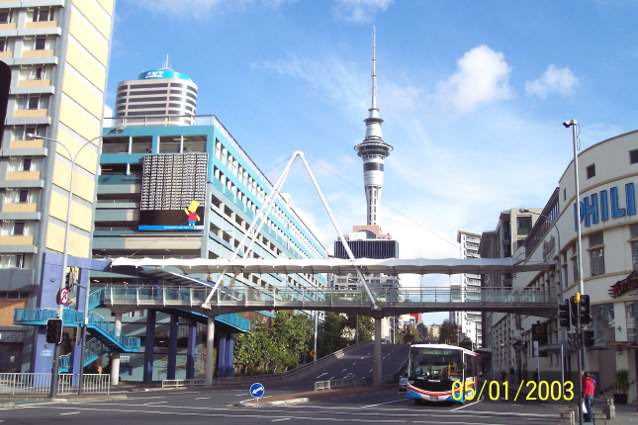 The Sky Tower is a telecommunications and observation tower in Auckland, New Zealand. Located at the corner of Victoria and Federal Streets within the city's CBD, it is 328 metres (1,076 ft) tall, as measured from ground level to the top of the mast, making it the tallest freestanding structure in the Southern Hemisphere and the 27th tallest tower in the world. It has become an iconic landmark in Auckland's skyline due to its height and design.

The tower is part of the SkyCity Auckland casino complex, originally built in 1994–1997 for Harrah's Entertainment. Several upper levels are accessible to the public, attracting an average of 1,150 visitors per day (over 415,000 per year).

The Sky Tower has several upper levels that are accessible to the public:

The upper portion of the tower contains two restaurants and a cafe—including New Zealand's only revolving restaurant, located 190 m (620 ft) from the ground, which turns 360 degrees every hour. There is also a brasserie-style buffet located one floor above the main observatory level. It has three observation decks at different heights, each providing 360-degree views of the city. The main observation level at 186 m (610 ft) has 38 mm (1.5 in) thick glass sections of flooring giving a view straight to the ground. The top observation deck labeled "Skydeck" sits just below the main antenna at 220 m (720 ft) and gives views of up to 82 km (51 mi) in the distance.

The tower also features the "SkyJump", a 192-metre (630 ft) jump from the observation deck, during which a jumper can reach up to 85 km/h (53 mph). The jump is guide-cable-controlled to prevent jumpers from colliding with the tower in case of wind gusts. Climbs into the antenna mast portion (300 m or 980 ft heights) are also possible for tour groups, as is a walk around the exterior.

The tower is also used for telecommunications and broadcasting with the Auckland Peering Exchange (APE) being located on Level 48.[14] The aerial at the top of the tower hosts the largest FM combiner in the world which combines with 58 wireless microwave links located above the top restaurant to provide a number of services. These include television, wireless internet, RT, and weather measurement services.