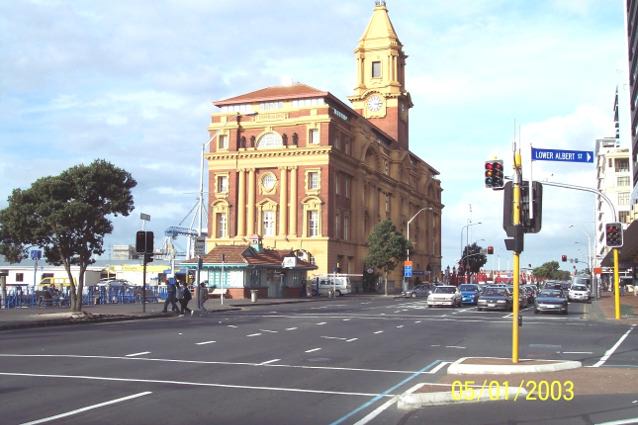 The ferry terminal is composed of two main elements, with an older, yellow Edwardian Baroque building facing Queen Street and the city side, while the newer wharves and waiting area building (the actual ferry terminal of today) face the Waitematā Harbour.

The building usually referred to as the Auckland Ferry Terminal was designed by Alex Wiseman, and built by Philcox and Sons. Completed in 1912 on reclaimed land out of sandstone and brick with a base of Coromandel granite, it cost Ł67,944 to construct (approximately NZ$10.9 million in 2016), a large sum for the day.

Since 1982, it has had a Category I classification with the New Zealand Historic Places Trust (since renamed to Heritage New Zealand), and was extensively restored between 1986 and 1988. It now contains shops and cafes on the lower level, with most ferry operations moved to the new building.

The more contemporary ferry piers and waiting area were constructed mostly as an open-sided structure with a curved seagull/sail-roof, which together with ornamental "smokestack" turrets is designed to evoke ships berthed behind the original building. It also needed to be of a low profile to retain building views, and was designed by architect Murray Day to be easily maintainable and expandable.

Between 2009 and 2010, ARTA carried out major remedial work on the wharf structure, which had not had such work done since construction. The initial works found some parts of the structure in worse shape than expected, as saltwater had slowly infiltrated the reinforced concrete. Initial urgent works were expected to finish in 2009.