These are Maori Tiki and other pendants housed in the Auckland War Memorial Museum Auckland New Zealand. Most of them are carved of Greenstone or Jade. The Tiki is worn around the neck. 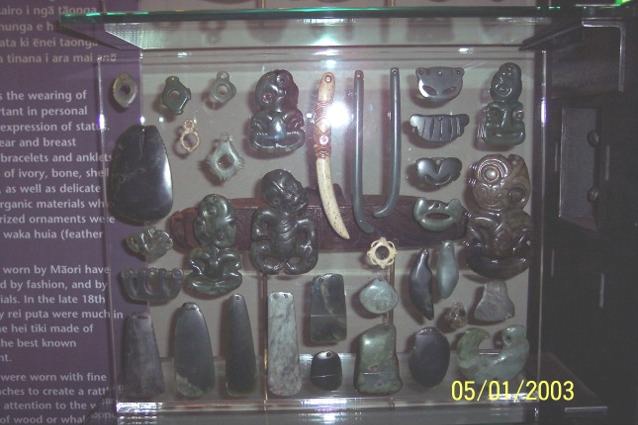 In Māori mythology, Tiki is the first man created by either Tūmatauenga or Tāne. He found the first woman, Marikoriko, in a pond; she seduced him and he became the father of Hine-kau-ataata. By extension, a tiki is a large or small wooden or stone carving in humanoid form, although this is a somewhat archaic usage in the Māori language. Carvings similar to tikis and coming to represent deified ancestors are found in most Polynesian cultures. They often serve to mark the boundaries of sacred or significant sites.

In traditions from the West Coast of the South Island of New Zealand, the first human is a woman created by Tāne, god of forests and of birds. Usually her name is Hine-ahu-one. In other legends, Tāne makes the first man Tiki, then makes a wife for him. In some West Coast versions, Tiki himself, as a son of Rangi and Papa, creates the first human by mixing his own blood with clay, and Tāne then makes the first woman. Sometimes Tūmatauenga, the war god, creates Tiki. In another story the first woman is Mārikoriko. Tiki marries her and their daughter is Hine-kau-ataata. In some traditions, Tiki is the penis of Tāne. In fact, Tiki is strongly associated with the origin of the reproductive act.

In one story of Tiki among the many variants, Tiki was lonely and craved company. One day, seeing his reflection in a pool, he thought he had found a companion, and dived into the pool to seize it. The image shattered and Tiki was disappointed. He fell asleep and when he awoke he saw the reflection again. He covered the pool with earth and it gave birth to a woman. Tiki lived with her in serenity, until one day the woman was excited by an eel. Her excitement passed to Tiki and the first reproductive act resulted.