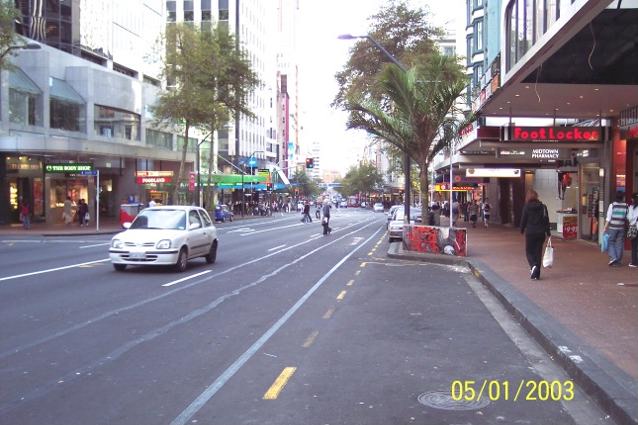 Queen Street is the major commercial thoroughfare in the Auckland CBD, Auckland, New Zealand's main population centre. The northern end is at Queens Wharf on the Auckland waterfront, adjacent to the Britomart Transport Centre and the Downtown Ferry Terminal. The road is close to straight, the southern end being almost three kilometres away in a south-southwesterly direction on the Karangahape Road ridge, close to the residential suburbs in the interior of the Auckland isthmus.

Named after Queen Victoria, Queen Street was an early development of the new town of Auckland (founded in 1840), although initially the main street was intended to be Shortland Street, running parallel to the shore of Commercial Bay. The early route of Queen Street led up the middle of a gully following the bank of the Waihorotiu Stream (later bounded in as the 'Ligar Canal'). This canal was culverted beneath the street from the 1870s onward, allowing for further development of the street to be undertaken. The course of the stream is still reflected today in the slight bend of lower Queen Street. From north of Shortland Street, Queen Street is built on land reclaimed from the sea in the late 19th century (see Auckland waterfront article).

There are several other 'Queen Streets' in the greater Auckland area, mostly in suburbs that were separate towns before being absorbed by a growing central city. Auckland was also called the "Queen City" since before the turn of the 20th century, though that term is now overshadowed by the nickname "City of Sails".

The proportion of people born overseas was 73.6%, compared with 27.1% nationally.

Although some people objected to giving their religion, 54.5% had no religion, 27.0% were Christian, and 14.4% had other religions.

Māori settlements in the Queen Street area were along the local stream; Te Wai Horotiu (The water of Horotiu) or Waihorotiu Stream. The stream as a food source and for other purposes. It ran from the ridge along Karagahape Road towards the sea. Horotiu is the name of a taniwha (guardian spirit) which was believed to live in the stream. In 1841 colonial settlers built a number of wooden buildings along the western side, following the general path of the Waihorotiu Stream according to the plans set out by surveyor Felton Mathew. While the street was metalled in 1843 ('metal' is a New Zealand term for gravel road), the natural stream still often overflowed its banks, and the area was still swampy. This led to canalisation and later covering-over of the stream.

After a fire in 1858 destroyed around 50 buildings in High Street and Shortland Street, the commercial district began to shift towards Queen Street instead, and the first brick and plaster buildings of the 1860s started to cement this move, with the Bank of New Zealand building (only the façade extant today) being one of the first examples. Fires however still continued to plague the new town, with one in 1873 wiping out another 54 buildings in the Queen Street area between Wellesley Street West and Grey Street (today Greys Avenue). The fires, amongst other things, led to the establishment of the Auckland Volunteer Fire Service.

In the 1880s, the first horse-drawn buses began connecting Queen Street with areas such as Ponsonby Road and Remuera. In 1900, the first motorcar was admired on the street, and in 1902 the street was finally asphalted, the first street in New Zealand. The same year the first electric trams also arrived, to provide services until 1956.

The late 19th and early 20th centuries saw a large number of imposing buildings constructed, such as the Smith & Caughey's building, the Auckland Town Hall and the General Post Office at the waterfront, later to become the Britomart Transport Centre. By that time, the street was popular for events such as parades and festivities, as well as for political activities such as the strike demonstrations of 1913. The Queen Street riots broke out in the adjacent Aotea Square in late 1984. During the second half of the 20th century, many of the older buildings on Queen Street were demolished to make space for larger office buildings.

Queen Street is known by reputation all over the country, even by people who have never seen it. It gives its name to the most expensive square in the New Zealand version of Monopoly and to a somewhat disrespectful description of business people with rural investment interests (but lacking farming expertise): 'Queen Street farmers'. The street was immortalised by The Front Lawn with their song (It started on) Queen Street.

The street has been the site of numerous parades, marches and other events of political, cultural or sporting nature. Together with adjacent High Street, it is the main retail precinct of the central city, with most national store, bank and restaurant franchises having a branch on the street. Several important other local businesses, such as the Smith & Caughey's department store, have flagship branches here.

The street sees very high pedestrian numbers, estimated by some as up to 10 times as high as on Broadway in Newmarket, seen as Queen Street's closest shopping street rival in Auckland.