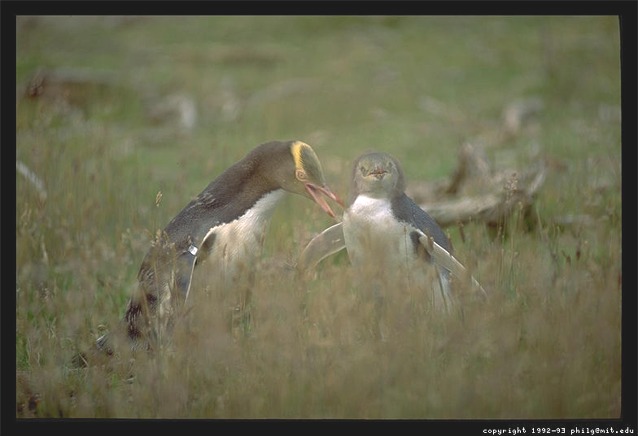 The Yellow-eyed Penguin (Megadyptes antipodes) is a penguin found in New Zealand, on the south-east coast of South Island, Foveaux Strait and Stewart Islands, and Auckland and Campbell Islands.

This is a medium-sized penguin with pale yellow eyes, growing to approximately 65cm. It has a pale yellow head with black feather shafts. There is a band of bright yellow running from its eyes around the back of the head. The juvenile has a greyer head with no band.

This penguin usually nests in forest or scrub. It feeds mainly on Red Cod, Opal Fish, sprat and squid.

The current status of this penguin is endangered, with an estimated population of 4000. This is considered to be the world's rarest penguin species. The main threats include habitat degradation and introduced predators (which include domestic cats).

Currently, scientists are baffled by an unknown disease that is killing off 80% of the baby penguins from spring 2004. The area that has been suffering the most from this disease is on New Zealand's South Island. Scientists are trying to determine the nature of the illness, which is believed to be a strain of cornynebacterium.