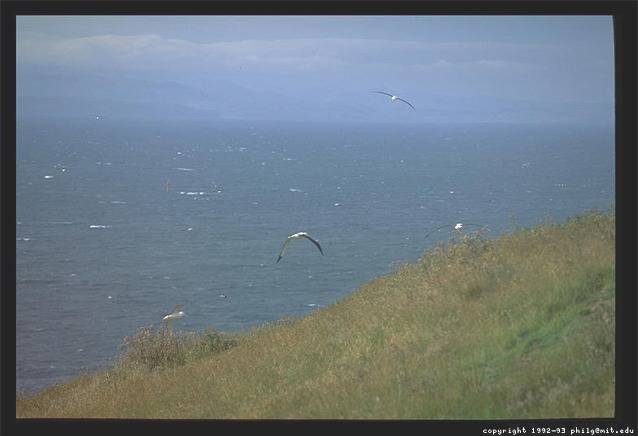 The albatrosses (from Portuguese Alcatraz, a pelican) are seabirds in the family Diomedeidae, which is closely allied to the petrels. They were once commonly known as Goonie birds or Gooney birds.

This is a group of large to very large birds with very long narrow wings, which are aerodynamically highly efficient. The beak is large, strong and sharp-edged, the upper mandible terminating in a large hook. The feet have no hind toe, and the three anterior toes are completely webbed.

Albatrosses travel huge distances using a technique used by many long-winged seabirds called dynamic soaring. This enables them to minimise the effort needed by gliding across wave fronts gaining energy from the vertical wind gradient. Their principal food is cephalopods.

All 21 albatross species are endangered species (or more threatened than that) according to the IUCN Red List. Part of the blame can be put on longliners, a type of fishing technique.

"During line setting, longliners set a single line up to 130 km long behind the boat. Attached to it are literally thousands of baited hooks. An estimated 1 billion hooks are set annually by the world's longline fleets. Some of the baited hooks are eaten not by their intended targets, but by albatrosses and other seabirds. The hooked birds are dragged under water and drown." (BirdLife.net, 2004).

The taxonomy of the albatross group is very fluid at the present time. The American Ornithological Union places seabirds, birds of prey and many others in a greatly enlarged order Ciconiiformes, whereas in Europe, South Africa, Australia and New Zealand, the more traditional Procellariiformes is retained.

Both the British Ornithologists' Union and the South African authorities split the albatrosses into four genera as indicated in the table. (Ibis (2002) 144 p707-710.)

The name Diomedea, assigned to the albatrosses by Linnaeus references the mythical metamorphosis of the companions of the Greek warrior Diomedes into birds.

The world's only mainland royal albatross colony (http://www.albatross.org.nz/) is within the city limits of Dunedin, New Zealand.

An albatross figures prominently in the Samuel Taylor Coleridge poem The Rime of the Ancient Mariner.