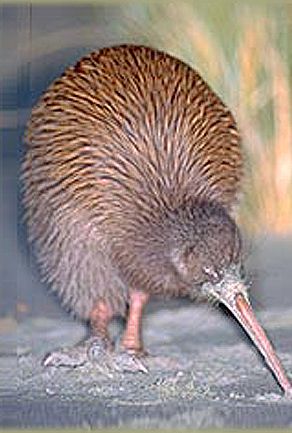 A kiwi is any of the species of small flightless birds native to New Zealand of the genus Apteryx (the only genus in family Apterygidae). At around the size of a domestic chicken, kiwi are by far the smallest living ratites. Though they are thought to be most closely related to either cassowaries or moa, their evolutionary origin is still uncertain. Several kiwi species are endangered.

Prior to the arrival of humans in about 1300, New Zealand's only endemic mammals were two species of bat (the long-tailed bat (Chalinolobus) and the short-tailed bat (Mystacina)). The ecological niches that in other parts of the world were filled by creatures as diverse as horses, wolves and mice were taken up by birds (and, to a lesser extent, reptiles).

Kiwi are shy, nocturnal creatures with a highly developed sense of smell and, most unusual in a bird, nostrils at the end of their long, sharp bill. They feed by thrusting the bill into the ground in search of worms, insects, and other invertebrates; though they also take fruit and, if the opportunity arises, small crayfish, amphibians and eels.

Their adaptation to a terrestrial life is extensive: like all ratites they have no keel on the breastbone to anchor wing muscles, and barely any wings either: the vestiges are so small that they are invisible under the kiwi's bristly, hair-like, two-branched feathers. While birds generally have hollow bones to save weight and make flight practicable, kiwi have marrow, in the style of mammals. With no constraints on weight from flight requirements, some Brown Kiwi females carry and lay a single 450 gram egg.

Currently there are three accepted species, one of which has two sub-species: