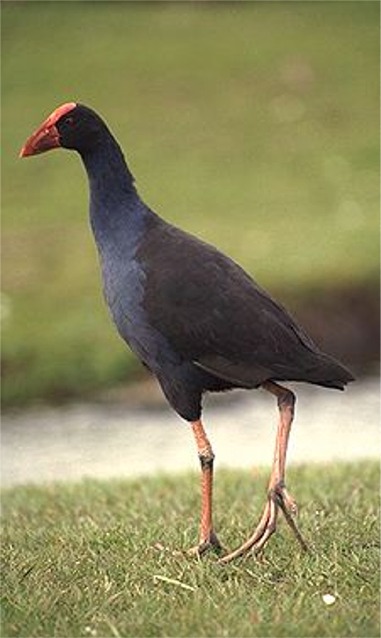 The Purple Swamphen, Purple Gallinule or Pukeko, Porphyrio porphyrio, is a large bird in the family Rallidae.

Their breeding habitat is warm reedbeds across southernmost Europe, Africa, tropical Asia, and Australasia. There are six or more subspecies, depending on the authority, which differ in the plumage colours.

The races are; P. p. porhyrio in Europe, P. p. madagascariensis in Africa, P. p. poliocephalus, in tropical Asia, P. p. melanotus in much of Australasia, P. p. indicus in Indonesia and P. p. pulverulentis in the Philippines.

The purple swamphen is called Pukeko by the indigenous Maori people. The early European settlers referred to it simply as a swamphen.

European birds are overall purple-blue, African and south Asian birds have a green back, and Australasian and Indonesian birds have black backs and heads. The Philippines subspecies is pale blue with a brown back.

There is a similar but much smaller species in North America, the American Purple Gallinule, Porphyrio martinica.

This chicken-sized bird, with its huge feet, bright plumage and red bill and frontal shield is unmistakable. It clambers through the reeds, eating the tender shoots.

This species has a very loud explosive call. It will fly short distances with dangling legs.