Moa - extinct flightless bird of New Zealand. This specimen is in the War Memorial Museum in Auckland New Zealand. 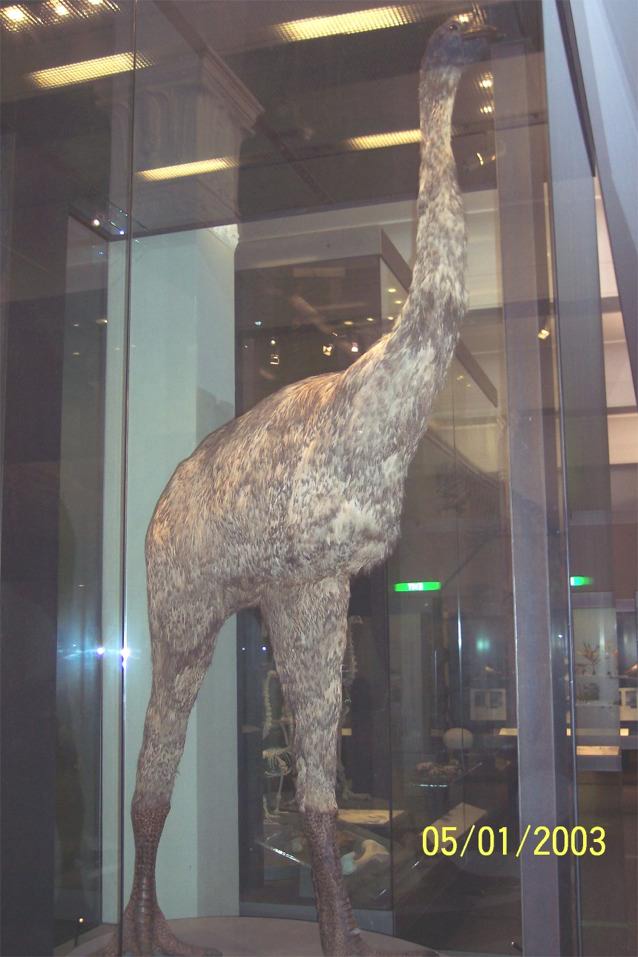 The moa were giant flightless birds of New Zealand. Ten species are known, of varying sizes, with the largest species, the Giant Moa (Dinornis robustus and Dinornis novaezelandiae), reaching about three metres (ten feet) in height and about 250 kilograms (550 pounds) in mass. They were the dominant herbivores in the forest ecosystem.

Moa became extinct around the year 1500. This is thought to be due to hunting and land clearance after humans arrived in the islands although another school of thought suggests that numbers were declining before the impact of humans. Before the arrival of humans, some moa were hunted by Harpagornis, the world's largest eagle which is also now extinct. The kiwi are regarded as moderately close relatives of the moa.

Although the indigenous Maori told European settlers tales about the huge birds which they called Moa, which had once roamed the flats and valleys, the widespread physical evidence that they had actually existed was never closely examined by early European settlers.

In 1839, John W. Harris, a Poverty Bay flax trader who was a natural history enthusiast, was given a piece of unusual bone by a Maori who had found it in a river bank. He showed the 15cm fragment of bone to his uncle, John Rule, a Sydney surgeon, who sent it to Richard Owen who at that time was working at the Hunterian Museum at the Royal Colllege of Surgeons in London. Owen became a noted biologist, anatomist and paleontologist at the British Museum.

Owen puzzled over the fragment for almost four years. He established it was part of the femur of a big animal, but it was uncharacteristically light and honeycombed.

Owen announced to a skeptical scientific community and the world that it was from a giant extinct bird like an ostrich, and named it "Dinornis". His deduction was ridiculed in some quarters but was proved correct with the subsequent discoveries of considerable quantities of moa bones throughout the land, sufficient to construct skeletons of the birds.

Although dozens of species were described in the late 19th and early 20th century, many were based on partial skeletons and turned out to be synonyms. More recent research, based on DNA recovered from museum collections, suggest that there were only ten species, including two giant moa. The giant moa seems to have had sexual dimorphism, with females being much larger than males; so much bigger that they were formerly classified as separate species.

In July 2004, the Natural History Museum in London placed on display the moa bone fragment Owen had first examined, to celebrate 200 years since his birth, and in memory of Owen as founder of the museum.

Though there is no reasonable doubt that the Moa is extinct, there has been occasional speculation that some may still exist in deepest south-westland, a rugged wilderness in the South Island. Cryptozoologists and others reputedly continue to search for them, but none have ever been found, and some might regard such efforts as pseudoscience. In 1993, two people claimed to have seen a bird they suspect was a Moa, but their report was largely dismissed as a hoax.