See this model from a distance. 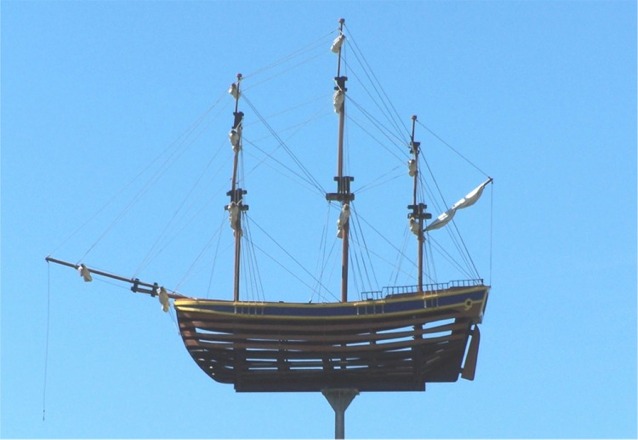 HM Bark Endeavour was originally a small merchant collier named Earl of Pembroke, built in Whitby, North Yorkshire. She was purchased by the Royal Navy and sponsored by the Royal Society of London for use in a scientific study to observe the 1769 transit of Venus across the sun, and renamed Endeavour after a major refit at Deptford on the River Thames in 1768, which converted her from a collier into a barque. She was known as Endeavour Bark to distinguish her from another Endeavour in the Royal Navy. The Endeavour's keel was 27.7m, and she transported 94 people on her first voyage.

Her commander was Lieutenant James Cook and other notable members the expedition were the naturalists Joseph Banks and Daniel Solander.

The voyage began on August 8, 1768, and took them to the Madeira islands, along the west coast of Africa and across the Atlantic to South America, arriving in Rio De Janeiro on November 13, 1768. The next leg was to round Cape Horn into the South Seas and on to Tahiti, where she remained for the next three months observing the transit of Venus.

Her official mission now completed, she continued with her tasks of charting the Southern Hemisphere. Endeavour sailed from Tahiti to New Zealand, where she spent the next six months surveying and mapping the coast under constant harassment from the Maori population. From New Zealand she moved west to the coast of Australia, sighting land on April 19, 1770. Putting into to a sheltered bay, her botanists were able to collect an astounding array of flora, so much so that Cook named the place Botany Bay.

For the next four months Cook charted the coast of Australia, until the ship ran aground on the Great Barrier Reef. After lightening the ship as much as possible, she was re-floated by an incoming tide, but sustained considerable damage. She was careened on the beach of a river estuary, now named the Endeavour River, where the modern town of Cooktown is located, and spent the next seven weeks undergoing repairs.

She turned for home arriving, after several other stops, on July 11, 1771. Cook's first voyage in Endeavour is of historical importance because of its contributions to the world's knowledge of seamanship and navigation, as well as geography. On this voyage Cook became the first captain to calculate his longitudinal position with accuracy, using a complex mathematical formula developed in the 1760s. He was also the first to substantially reduce scurvy among his crew, a serious danger on long voyages.

In 1772 Cook, now a captain, made two subsequent voyages of exploration in HMS Resolution, sailing from pole to pole, until he and four of his marines, were killed by natives on the Hawaiian Islands in 1779.

In 1773 the British Admiralty fitted out Endeavour as a store ship and finally sold her in 1775 for Ł615. After that point there is much doubt as to her fate. One account has her sold to the French in 1790 and renamed La Liberté, finally running aground in 1794, near Newport, Rhode Island, USA. Another version has her moored as a hulk on the River Thames near Woolwich in 1825. Yet another version has Endeavour returned to the coal trade in 1775 and grounded at Rhode Island in 1790. There is little hard evidence to support any one of these versions.

In January 1988, to commemorate the bicentenary of European settlement in Australia, work began in Fremantle, Western Australia on a replica of Endeavour. Financial difficulties delayed completion until April 1994. She then embarked on her own world trip, calling at many ports along the way