Te Poho-o-Rawiri (The Chest of David) Maori Marae situated in Gisborne New Zealand in the suburb of Kaiti Gisborne.

A marae (in New Zealand Māori, Cook Islands Māori, Tahitian), malaʻe (in Tongan), meʻae (in Marquesan) or malae (in Samoan) is a communal or sacred place that serves religious and social purposes in Polynesian societies. In all these languages, the term also means cleared, free of weeds, trees. Marae generally consist of an area of cleared land roughly rectangular (the marae itself), bordered with stones or wooden posts (called au in Tahitian and Cook Islands Māori) perhaps with paepae (terraces) which were traditionally used for ceremonial purposes; and in some cases, a central stone ahu or a'u. In the Rapa Nui culture of Easter Island, the term ahu has become a synonym for the whole marae complex.

In some modern Polynesian societies, notably that of the Māori of Aotearoa New Zealand, the marae is still a vital part of everyday life. In tropical Polynesia, most marae were destroyed or abandoned with the arrival of Christianity in the 19th century, and some have become an attraction for tourists or archaeologists. Nevertheless, the place where these marae were built are still considered tapu (sacred) in most of these cultures. 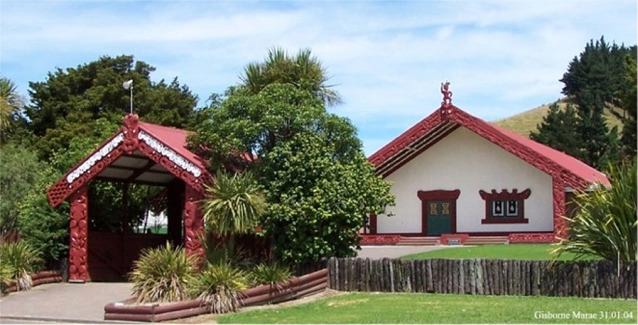 A wharenui ([ˈfaɾɛnʉ.i] literally "big house") is a communal house of the Māori people of New Zealand, generally situated as the focal point of a marae. Wharenui are usually called meeting houses in New Zealand English, or simply called whare (a more generic term simply referring to a house or building). Also called a whare rūnanga ("meeting house") or whare whakairo (literally "carved house"), the present style of wharenui originated in the early to middle nineteenth century. The houses are often carved inside and out with stylized images of the iwi's (or tribe's) ancestors, with the style used for the carvings varying from tribe to tribe. Modern meeting houses are built to regular building standards. Photographs of recent ancestors may be used as well as carvings. The houses always have names, sometimes the name of a famous ancestor or sometimes a figure from Māori mythology. Some meeting houses are built where many Māori are present, even though it is not the location of a tribe; typically, a school or tertiary institution with many Māori students.

The building often symbolises an ancestor of the wharenui's tribe. So different parts of the building refer to body parts of that ancestor:

Other important components of the wharenui include:

Meeting houses are the centre of any cultural, business, or any affair which is relevant to the iwi as a whole.