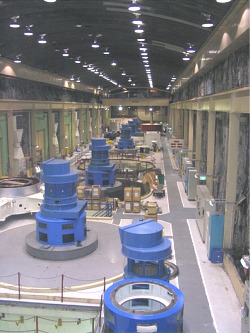 The Manapouri Power Station is an underground hydroelectric power station owned and operated by Meridian Energy Limited. It is the largest hydroelectric power station in New Zealand. The station lies deep in a remote area of New Zealand's South Island on the western arm of Lake Manapouri, in Fiordland (45º 31′ 17″ S 167º 16′ 40″ E. Most of the station's power output feeds to the aluminium smelter operated by New Zealand Aluminium Smelters Limited (NZAS) at Tiwai Point near Bluff, some 160km to the southeast.

The power station construction is a massive feat of civil engineering. The majority of the station including the machine hall and two 10km tailrace tunnels have been excavated under a mountain.

The station is located in the pristine Fiordland National Park. In the 1960s, environmental protests against construction galvanised New Zealanders from one end of the country to the other. The campaign to save the lake from being raised took on politicians and senior bureaucrats, and won. 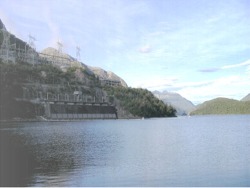 Soon after the power station began generating at full capacity in 1972, engineers confirmed a design problem. Greater than anticipated friction between the water and the tailrace tunnel walls meant reduced hydrodynamic head. For 30 years, until 2002 station operators risked flooding the powerhouse if they ran the station at an output greater than 585MW – a long way short of the designed peak capacity of 700MW. A second tailrace tunnel, 10km long and 10 metres in diameter, finally solved the problem. Now water can flow away from the station at a greater rate, increasing the effective head so that the turbines could generate more power, without using any more water.

The original plans for the power station development in the 1960s involved raising Lakes Manapouri by up to 30 metres, and merging Lakes Manapouri and Te Anau. A dam at the outlet of Lake Manapouri would have achieved this. As power station construction work progressed, the reality of the planned ecological damage became apparent to many New Zealanders, and protest became widespread and passionate. The Save Manapouri Campaign became an early New Zealand manifestation of the international awareness of the "environment" that came with the prosperity of the sixties.

"At its simplest, the issue was about whether Lake Manapouri should be raised by as much as 30 metres. But there was much more at stake than that. There were strong economic and engineering arguments opposing lake raising, and there were also legal and democratic issues underlying the whole debate. What captured the public's imagination across the country was the prospect that a lake as beautiful as Manapouri could be interfered with, despoiled and debased", writes Neville Peat.

In 1970, 264,907 New Zealanders, almost 10 percent of the population, signed the Save Manapouri petition. In the 1972 general election Manapouri was a significant election issue, and the Labour Government of Norman Kirk was elected on a platform that included a strong endorsement of the Save Manapouri ideals.

In 1963 the construction project begins: