View of the Auckland Harbour Bridge from North Shore City. 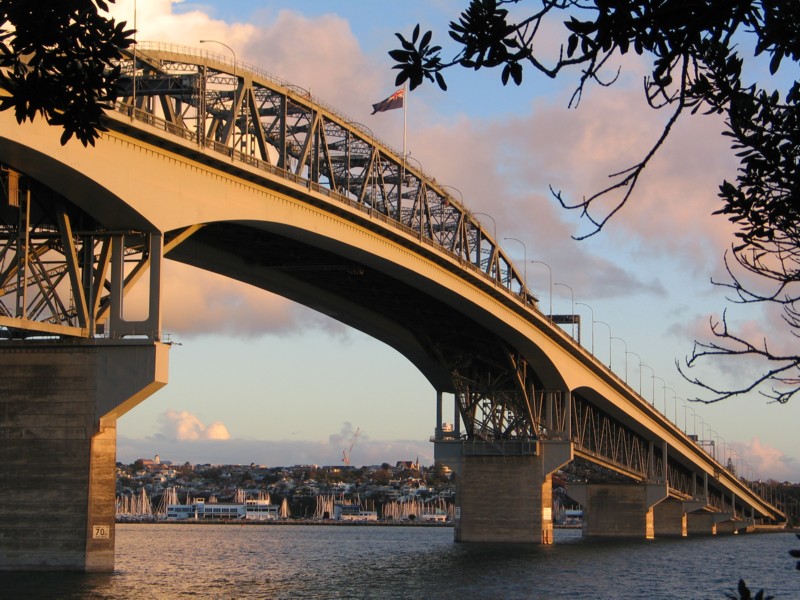 The Auckland Harbour Bridge is an eight-lane motorway bridge over the Waitematā Harbour in Auckland, New Zealand. It joins St Marys Bay on the Auckland city side with Northcote on the North Shore side. It is part of State Highway 1 and the Auckland Northern Motorway. The bridge is operated by the NZ Transport Agency (NZTA). It is the second-longest road bridge in New Zealand, and the longest in the North Island.

The original inner four lanes, opened in 1959, are of box truss construction. Two lanes that were added to each side in 1968–1969 are of orthotropic box structure construction and are cantilevered off the original piers. The bridge is 1,020 m (3,348 ft) long, with a main span of 243.8 metres, rising 43.27 metres above high water, allowing ships access to the deepwater wharf at the Chelsea Sugar Refinery, one of the few such wharves west of the bridge, the proposed Te Atatū port not having been built.

While often considered an Auckland icon, criticism has included complaints that it mimics the Sydney Harbour Bridge in copyist fashion. Many see the construction of the bridge without walking, cycling, and rail facilities as a big oversight. However, in 2016, "SkyPath", an add-on structure providing a walk-and-cycleway, received Council funding approval and planning consent.

Prior to the opening of the bridge in 1959, the quickest way from Auckland to the North Shore was by passenger or vehicular ferry. By road, the shortest route was via the Northwestern Motorway (then complete only between Great North Road and Lincoln Road), Massey, Riverhead, and Albany, a distance of approximately 50 km (31 mi).

As early as 1860, engineer Fred Bell, commissioned by North Shore farmers who wanted to herd animals to market in Auckland, had proposed a harbour crossing in the general vicinity of the bridge. It would have used floating pontoons, but the plan failed due to the Ł16,000 cost estimate ($1.9 million, adjusted for inflation as of March 2017).

In the 1950s, when the bridge was being built, North Shore was a mostly rural area of barely 50,000 people, with few jobs and a growth rate half that of Auckland south of the Waitemata Harbour. Opening up the area via a new route unlocked the potential for further expansion of Auckland.