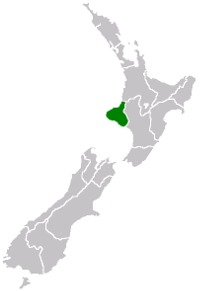 Taranaki is a region in New Zealand's North Island and the name of the mountain which is the region's main feature.

Taranaki is situated on a peninsula on the west coast of the North Island, surrounding the volcanic peak. The two large bays on either side of the peninsula's westernmost point, Cape Egmont, are prosaically named the North Taranaki Bight and the South Taranaki Bight.

Mount Taranaki - Te Maunga O Taranaki - is the dominant feature of the province, being the second tallest mountain in the North Island. Maori legend says that Taranaki previously lived with the Tongariro, Ngauruhoe and Ruapehu mountains in the central north island but fled to its current location after a battle with Tongariro.

Its original name of Taranaki was changed to Egmont when sighted by Capt. James Cook, but is now officially named "Mount Taranaki or Mount Egmont" [1] The mountain is a near perfect cone and dominates the landscape. It last erupted in the mid-eighteenth century. The mountain and its immediate surrounds form Egmont National Park. 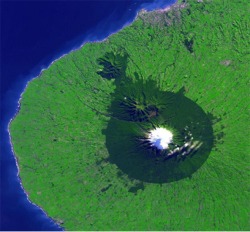 Satellite image of Mount Taranaki from the
NASA Earth Observatory showing the nearly
-circular Egmont National Park surrounding it.
New Plymouth is the grey area on the northern
coast.

The region has an area of 7258 km2, and a population (2001) of 102,858. Just under half live in the city of New Plymouth, located on the northern coast. Other centres include Waitara, Inglewood, Stratford, Opunake, Eltham, Hawera and Patea.

The province is exceptionally fertile, thanks to generous rainfall and the rich volcanic soil. Dairy farming predominates, with the milk factory just outside Hawera being the second largest in the Southern Hemisphere. There are also oil and gas deposits in the region, both on shore and off-shore. The Maui gas field off the north coast provides most of New Zealand's gas supply, as well as supporting two methanol plants (one formerly a synthetic petrol plant) near Waitara. More fuel and fertilizer is produced at Kapuni. However, the Maui field is being depleted sooner than expected, leading to increased efforts to find further reserves.

The way the land mass projects into the Tasman Sea with northerly, westerly and southerly exposures results in many excellent surfing and windsurfing locations, some of them considered world-class.

View of Mount Taranaki from Stratford
(facing west). Fanthams Peak can be seen
to the left of the main peak. Note the cow
in the foreground; Taranaki is a major
dairying region of New Zealand.

New Plymouth first experienced organised European settlement in the early 1840s. European colonisation was slowed by the local tribes' opposition to selling their land and strong identification with the King Movement. As a result of dubious land trading at Waitara there was much fighting in the New Zealand land wars of the 1860s, with thousands of British imperial troops being called in to pacify the area. The present main highway follows the path taken by the British as they marched from Patea north to New Plymouth.

Following the withdrawal of the British troops, Maori resistance continued, with Titokowaru leading an uprising which achieved some notable successes against the colonial forces in the south Taranaki region. Titokowaru advanced almost to Wanganui, defeating three colonial forces and causing much alarm amongst the settlers.

The result of Maori opposition to settlement was a series of illegal government land confiscations. The release of a Waitangi Tribunal report on the situation led to some debate on the matter in 2002. The authors of the report compared the suppression of Taranaki Maori to the Holocaust. This controversial choice of language met general disapproval, with one government minister being forced to resign for trying to defend it.