Kerikeri Stone Store on the left, St James at the rear, and Kemp House on the right. 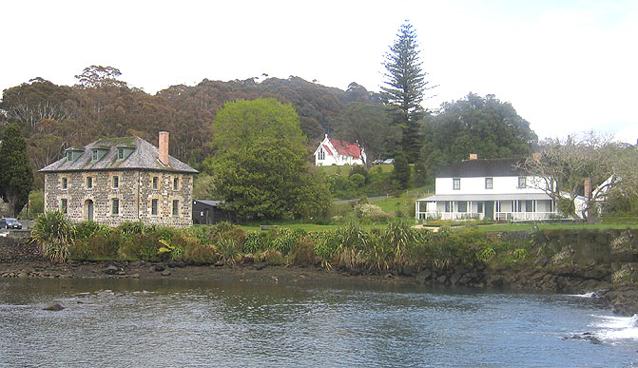 The Stone Store at Kerikeri in the Bay of Islands is New Zealand's oldest surviving stone building.

Part of the second Church Missionary Society station in New Zealand, the store was designed by John Hobbs to replace an earlier wooden storehouse. The Stone Store was erected between 1832 and 1836 by a mason, William Parrott, a carpenter, Ben Nesbitt, and a team of Māori. Construction was of sandstone from Australia, local volcanic rocks, and burnt shell mortar. Iron ties and window bars were forged by James Kemp, though these unfortunately corroded the sandstone. Initially the building had a wooden belfry on one side.

The Stone Store was intended to be the base of the Church Missionary Society's trading post, selling produce from the farms at the te Waimate mission to ships, and European goods to Māori. Marsden planned to build a flour mill on the adjacent Kerikeri River, but this was eventually built at te Waimate instead. Stone was used to protect wheat from rats, for defence against Māori and to reduce the risk of fire.

By the mid-1830s, the mission stations could not compete with the private enterprise of other European settlers, either as traders or farmers, and the store was not profitable.

The building was converted into the mission library by Bishop Selwyn in the early 1840s. Following the sacking of Kororareka in the Flagstaff War, it was briefly taken over by Governor George Grey for use as a magazine and barracks. After the cessation of hostilities in 1845, the stone store was leased to become the centre of Kauri gum trading operation, and then in 1863 it was used to house a boys' school. The building was sold to the Kemp family in 1874, and was used as a general store, although it increasingly became a tourist attraction. The Stone Store was purchased from the Kemps by the New Zealand Historic Places Trust (now Heritage New Zealand) in 1975. Conservation work was done in the 1990s. The store, together with the neighbouring Mission House now form a small museum.

Kerikeri, the largest town in Northland, New Zealand, is a tourist destination 240 kilometres (150 mi) north of Auckland and 80 kilometres (50 mi) north of the northern region's largest city, Whangarei. It is sometimes called the Cradle of the Nation, as it was the site of the first permanent mission station in the country, and it has some of the most historic buildings in the country.

A rapidly expanding centre of subtropical and allied horticulture, Kerikeri is in the Far North District of the North Island and lies at the western extremity of the Kerikeri Inlet, a northwestern arm of the Bay of Islands, where fresh water of the Kerikeri River enters the salty Pacific Ocean. A fast-growing community, the 2001 New Zealand census recorded a population of 4,878 which was an increase of 16.3 percent over the 1996 figure. The 2006 census tally of 5,859 was a further population growth of 20 percent, and the 2013 New Zealand census showed an increase by a further 11 percent to 6,504.

The village was established by New Zealand's pioneering missionaries, who called it Gloucester Town, but the name did not endure. The Māori word Kerikeri was spelled and pronounced as Keddi Keddi or even Kiddee Kiddee, but the town's name is today generally pronounced Kerry Kerry, sometimes with the rolled 'r' used by Māori.

In 1814, Samuel Marsden acquired land at Kerikeri from Hongi Hika for the use of the Church Missionary Society for a payment of forty-eight axes. The protector of the Kerikeri mission station was the chief, Ruatara, a nephew of Hongi Hika.

Kerikeri was the first place in New Zealand where grape vines were planted. Samuel Marsden planted 100 vines on 25 September 1819 and noted in his journal that New Zealand promised to be very favourable to the vine. In the same year Charlotte Kemp planted the first citrus, and New Zealand's first commercial plantings of passionfruit were established in 1927, and about 1932 the country's first avocados were planted. The plough was first used in New Zealand at Kerikeri, by Rev. J. G. Butler, on 3 May 1820.