The Treaty of Waitangi 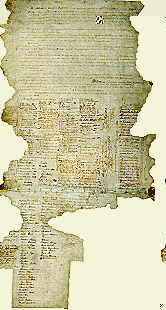 The Treaty of Waitangi

The Treaty of Waitangi (Maori Te Tiriti o Waitangi) was signed on February 6, 1840 at Waitangi in the Bay of Islands, New Zealand. It was signed by representatives of the British Crown, the chiefs of the Confederation of the United Tribes of New Zealand, and other Maori tribal leaders.

The Treaty, as New Zealanders often call it, made New Zealand a British colony from the British point of view. Today it is generally considered the founding point of New Zealand as a nation. However, there have been major issues concerning the original translation of the treaty from English to Maori. An example is kawanatanga, a cognate transplanted from the English, which appeared in the Maori language for the first time in the Treaty. It was used there to translate the concept of sovereignty, for which there was no existing suitable word in the Maori language at the time. The word is made up of kawana, a transliteration into Maori of the English word governor, and the existing Maori suffix -tanga, similar to the English -ship or -dom. A literal translation of the word, therefore, would be governorship. Other Maori words with the suffix -tanga include rangatiratanga, "chieftainship", and kingitanga, "kingship".

The meaning attached to this word, and in particular how it relates to rangatiratanga, is vital to discussion of the Treaty of Waitangi. This treaty is still vitally important in modern New Zealand, and remains the object of much controversy and political debate.

The Signing of the Treaty

The Treaty of Waitangi was first proposed by Captain William Hobson on his return to Britain from his first visit to New Zealand. He received a mandate from the British government to carry out his plan and was given the title of Lieutenant-Governor. He arrived in New Zealand and drafted the Treaty with James Busby, who was the British Resident in New Zealand and had been given the task of greeting Hobson upon his arrival and helping to draft the Treaty. Busby had previously drafted the Declaration of the Independence of New Zealand which had been signed by some Maori chiefs in 1835 (not all). Henry Williams, a missionary, translated the text into Maori, and gave a verbal explanation at the initial signing. This translation has been the focus of much scrutiny.

Hobson headed the British signatories. Of the forty or so Maori chiefs, the Ngapuhi rangatira Hone Heke was the first to sign the treaty. To enhance the authority of the treaty eight further copies were made and then sent around the country to gather additional signatures:

Around fifty meetings were held to discuss and sign the copies from February to September, 1840 and a further 500 signatures were added to the treaty. Several chiefs, equally, declined to sign. New Zealand was constituted as a colony separate from New South Wales on November 16, 1840.

In 1841, the Treaty narrowly escaped destruction when the government offices in Auckland were destroyed by fire. Subsequently, the Treaty documents were fastened together and deposited in a safe in the Colonial Secretary's office in Auckland and later in Wellington, when the Capital was relocated. The documents were left untouched until 1865 when a list of signatories was produced. In 1877 the English language rough draft of the Treaty was published along with photolithographic facsimiles of the Treaty and the originals were returned to storage. It was not until 1908 when Dr Hocken found the Treaty in poor condition, having been eaten by rodents. The document was restored by the Dominion Museum in 1913. In February 1940 the Treaty was taken to Waitangi for display in the Treaty house, during the Centenary celebrations - this was possibly the first time the Treaty had been on public display since the signing in 1840. In 1956 the Department of Internal Affairs placed the Treaty in the care of the Turnbull Library and it was eventually displayed in 1961. Further preservation steps were taken in 1966, with improvements to the display conditions. During the years 1977 to 1980, the Turnbull Library carried out extensive remedial treatment to the documents before the Treaty was deposited in the Reserve Bank. In anticipation of a decision to exhibit the treaty in 1990, the Sesquicentennial of the signing, full documentation and reproduction photography was carried out. Several years planning culminated with the opening of the Constitution Room at the then National Archives by the Prime Minister in November 1990. The documents are currently on permanent display in the Constitution Room at Archives New Zealand's headquarters in Wellington.

The anniversary of the signing of the Treaty is now commemorated (although far from celebrated) in New Zealand as a public holiday, Waitangi Day, on 6 February. The first Waitangi Day was not until 1934 and the day was not made a public holiday until 1974. The commemoration has often been the focus of protest by Maori and has frequently attracted controversy. The anniversary is officially commemorated at the Treaty House at Waitangi where the Treaty was first signed.

The Treaty itself is short, consisting of only three articles. The first article grants the Queen of the United Kingdom sovereignty over New Zealand. The second article guarantees to the chiefs, their continued chieftainship, and ownership of their lands and treasures (taonga). It also specifies that Maori will sell land only to the Crown. The third article guarantees to all Maori the same rights as all other British subjects. Significantly, the English and Maori versions are not identical. This has caused difficulty in interpreting the Treaty and continues to undermine its effect.

The most critical difference revolves around the interpretation of two Maori words, kawanatanga (literally governorship) which is ceded to the Queen in the first article and rangatiratanga (literally chieftainship) which is retained by the chiefs in the second. Many Maori at that time had little understanding of either sovereignty or 'governorship' and because of this translation difficulty some question whether they fully understood what they were signing.

Maori beliefs and attitudes towards ownership of land were not the same as those of the British and this was also to cause problems later on. Maori chiefs saw themselves as `kaitiaki' or guardians of the land, and would traditionally grant permission for the land to be used for a time for a particular purpose. It is possible that some may have believed that they were selling permission to use the land rather than selling the land itself.

Effect of the Treaty

In the short term the immediate effect of the Treaty was to prevent the sale of Maori land to anyone other than the Crown. This measure was intended to protect Maori from the kinds of shady land purchases which had alienated indigenous people from their land with minimal compensation in other parts of the world. Indeed, in anticipation of the Treaty being signed, the New Zealand Company made several hasty land deals and shipped settlers from England to settlements in New Zealand, on the assumption that, possession being nine tenths of the law, the settlers would not be evicted from land if they were occupying it. Essentially the Treaty was an attempt to establish a system of property rights for land with the Crown controlling and overseeing the process of land sale to prevent abuse.

Initially this process worked well. Maori were quite willing and eager to sell land. Settlers were very interested in buying. The Crown mediated the process to ensure that the true owners were properly identified (not easy for tribally owned land) and were fairly compensated at least by the standards of the time. However after a while Maori became disillusioned and were less and less willing to sell, while the Crown came under increasing pressure from Settlers wishing to buy. Consequently government land agents were involved in a number of very dubious land purchases. Agreements were negotiated with only one owner of tribally owned land and in some cases land was purchased from the wrong people altogether. Unrest and rebellion caused by these actions were met with further punitive land confiscations. Eventually this lead to the New Zealand Wars which culminated in the confiscation of a large part of the Waikato and Taranaki.

In later years this oversight role was in the native land court, later renamed the Maori Land Court. There is much criticism today of the way in which these courts functioned and it was through these courts that much maori land subsequently became alienated. Over the longer term the land purchase aspect of the treaty has declined in significance while the clauses of the treaty which deal with the question of sovereignty and those rights retained by Maori have taken on greater importance.

During the late 1960s and 1970s the Treaty of Waitangi became the focus of a strong Maori protest movement which rallied around calls for the government to `honour the treaty' and to `redress treaty grievances'. Maori expressed their frustration about continuing violations of the treaty and subsequent legislation by government officials, as well as inequitable legislation and unsympathetic decisions by the Maori Land Court alienating Maori land from its Maori owners.

On October 10, 1975, the Treaty of Waitangi Act, which was to provide for the observance, and confirmation, of the principles of the treaty, received royal assent. This established the Waitangi Tribunal to hear claims of official violations of the Treaty of Waitangi. Originally its mandate was limited to recent claims, however in 1985 this was extended to allow it to consider Crown actions dating back to 1840, including the period covered by the Maori Wars.

Because of the short length and limited scope of the Treaty, it is not a suitable document to be a constitution and is not recognised as such. However, it is the basis of New Zealand's founding myth and is a vitally important document because of this.

Often, people speak of the principles or spirit of the Treaty. Unfortunately, there is no clear consensus as to the nature of these. For some people the spirit is one of the joining of two peoples to become one, or as Hobson himself said on the day of the first signing, "Now we are one people". For others the 'spirit' is one of a partnership between the Crown and Maori.

Regardless of the political controversy which continues to swirl around the meaning of the treaty, it remains an extraordinary document when viewed in historical context of the time. The contrast between the Treaty and the treatment accorded indigenous people by European colonisers in most other parts of the world is striking