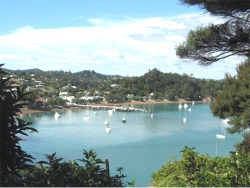 Russell, formerly known as Kororareka, was the first permanent European settlement in New Zealand. Russell is situated in the Bay of Islands, in the far north of the North Island.

Russell, Bay of Islands, New ZealandWhen European and American ships began visiting New Zealand in the early 1800s the Maori quickly recognised that there were great advantages to be gained by contact and trade with these strangers.

The Bay of Islands offered a safe anchorage and had a high Maori population. To attract ships the Maori began to supply food, timber and girls. Very quickly grog was added to the list. What the Maori wanted was firearms and prestige in equal amounts and also other goods of European manufacture.

Kororareka developed as a result of this trade. It soon earned an very bad reputation, a community without laws. European law had no influence and Maori law was seldom enforced within the town's area. Kororareka became known as the "Hell Hole of the Pacific".

When the Colony of New Zealand was founded in 1840 Governor Hobson was reluctant to choose Kororareka as his capital. Instead he selected Okiato, situated a few kilometers away and renamed it Russell in honour of the Secretary of State for the Colonies, Lord John Russell. A year later he moved the capital to Auckland.

Meanwhile the name Russell was applied loosely to both Kororareka and Okiato. This was made official by Governor FitzRoy in 1844. A year later the town of Kororareka was burnt by Hone Heke at the beginning of the First Maori War.

Now the name Russell applies only to the erstwhile Kororareka while Okiato has resumed its original name. The car ferry across the Bay of Islands, the main tourist access to Russell, runs between Okiato and Opua.