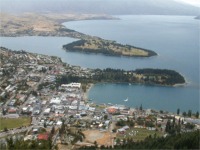 The view from the Skyline Gondola,
looking south across Queenstown
Bay. The water between the two
peninsulas is the Frankton Arm,
leading to the lake's outlet to the
Kawarau river (off left)

According to the 2001 census the usually resident population of the Queenstown urban area (including Frankton and Kelvin Heights) 8535, an increase of 19.3% since 1996. The town is the largest centre in Central Otago, but for some administrative purposes is considered part of Southland.

Built around an inlet on Lake Wakatipu, a long thin "S" shaped lake in the Southern Alps of New Zealand, its neighbouring towns and districts include Arrowtown, Wanaka, Alexandra, and Cromwell. The nearest cities are Invercargill and Dunedin.

A typical resort town, Queenstown is a centre for adventure tourism. Skiing, jet boating, bungy jumping and tramping are all strong promotional themes.

Another reason that people travel to Queenstown is because of its reputation as a wine and food centre. Neighbouring Arrowtown features excellent restaurants and bars, and Queenstown lies close to the centre of a small wine producing region. Pinot Noir produced in this area fetches premium prices.

Along with Mount Ruapehu, Queenstown is a centre for snow sports in New Zealand, with people from all over the country and the rest of the world travelling to ski at the four main mountain skifields (Cardrona, Coronet Peak, The Remarkables and Treble Cone).

Queenstown airport was controversially upgraded to be able to handle jet aircraft, including international flights from Australia in the 1990's. A side effect was that Air New Zealand fitted 'hush kits' to its entire fleet of Boeing 737 aircraft. Queenstown airport is also New Zealand's busiest helicopter base.

Road access is via State Highway 6 which connects from Cromwell to the east via the winding and slip-prone Kawarau gorge, and to the south via the lake shore to Lumsden and Invercargill. A notoriously difficult road over the Crown Range leads to Cardrona skifield and Wanaka, and is New Zealand's highest public road.

The Remarkables and Lake Wakatipu
from Queenstown