Christchurch is a city on the east coast of the South Island of New Zealand.

The city is named after the cathedral college of Christ Church in the University of Oxford. Its Maori name is Otautahi, from the Maori chief Tautahi who had a settlement on the banks of the Avon River.

Christchurch is the main city in Canterbury, New Zealand. It lies at the southern end of Pegasus Bay, in the middle of the east coast of the South Island, between Banks Peninsula and the Canterbury Plains. It is bounded, to the east by the Pacific Ocean coast and the estuary of the Avon and Heathcote rivers, to the south and south-east by the volcanic slopes of the Port Hills and in the north by the Waimakariri river.

The large number of public parks and many well developed residential gardens with many trees throughout the city have given it the name of The Garden City. Hagley Park and the Christchurch Botanic Gardens are located in the centre of the city, with Hagley Park being a site for sports such as golf, netball and rugby, and for open air concerts by local bands and the Christchurch Symphony Orchestra.

With much of the city being flat and only a few metres above sea level, spectacular views can be obtained from almost any high building. At these low elevations the city appears more like a forest with only a few buildings visible, rather than a major city.

Christchurch has a temperate climate, with temperatures in January ranging from an average minimum of 12ºC to an average maximum of 21ºC, and from 1ºC to 10ºC in July. Summer temperatures are often moderated by a sea breeze from the northeast. A notable feature of the weather is the nor'wester, a hot föhn wind that is associated with increases in suicide and domestic violence, and occasionally reaches gale force and causes widespread damage to property.

On cold winter nights, the surrounding hills, clear skies and frosty calm conditions often combine to form a stable inversion layer above the city that traps vehicle exhausts and smoke from domestic fires to cause smog. While not as bad as smog in Los Angeles, California, Christchurch smog has often been known to exceed World Health Organisation recommendations for air pollution. The city has strict requirements for domestic home heating in order to limit air pollution. In winter, it is not uncommon for snow to fall.

On 6 March 2001, the area administered by the Christchurch City Council had a population of 316,227, making it the second largest in New Zealand, and the largest city in the South Island. The Christchurch Urban Area is the third largest in the country, after Auckland and Wellington.

Local economy was based on the agricultural produce of the Canterbury plains. Early manufacturers processed agricultural produce, especially sheep and dairy products, into finished products. The early presence of the University of Canterbury and the heritage of the city's academic institutions working in association local businesses has fostered a number of technology based industries. The region now has a range of "new economy" sectors.

Tourism is also a significant factor of the local economy. The closeness of the ski-fields and other attractions of the Southern Alps and hotels and an airport that meets international standards make Christchurch a stopover destination for many tourists.

Christchurch's local government is a democracy that includes:

Archeological evidence found in a cave at Redcliffs indicates that the Christchurch area was first settled by moa-hunting tribes. Maori oral history tells that humans began living in the area around 1000 AD. These first inhabitants were followed by the Waitaha who are thought to have migrated from the east coast of the North Island in the 16th century. This migration was joined by the Ngati Mamoe and Ngai Tahu and continued until about 1830.

Although there were settlers from the 1830s, notably the Deans at Riccarton, what are regarded as the First Four Ships were chartered by the Canterbury Association, and arrived on December 16, 1850 bringing the first English settlers to Lyttelton Harbour. The four ships were The Randolph, The Charlotte Jane, Sir George Seymour, and Cressy.

Captain Thomas, the Canterbury Association's Chief Surveyor surveyed the surrounding area. By December 1849 he had commissioned the construction of a road from Port Cooper, later called Lyttelton, to Christchurch via Sumner. However this proved more difficult than expected and road construction was stopped while a steep foot and pack horse track was constructed over the hill between the port and the Heathcote valley, where access to the site of the proposed settlement could be gained. This track became known as the Bridle Path, because the path was so steep that pack horses needed to be led by the bridle.

Goods that were too heavy or bulky to be transported by pack horse over the Bridle Path were shipped by small sailing vessels some eight miles by water around the coast and up the estuary to Ferrymead. New Zealand's first public railway line was opened from Ferrymead to Christchurch in 1863. Due to the difficulties in travelling over the Port Hills and the dangers associated with shipping navigating the Sumner bar, a railway tunnel was bored through the Port Hills to Lyttelton, opening in 1867.

Christchurch became a city by Royal Charter on July 31, 1856, making it the oldest city in New Zealand.

Christchurch was the seat of provincial administration for the province of Canterbury.

A road tunnel was constructed between Lyttelton and Christchurch in the early 1960s.

In 1974 Christchurch was host to the Commonwealth Games.

Christchurch has played a significant role in the history of Antarctic exploration. Both Robert Falcon Scott and Ernest Shackleton used the port of Lyttelton as the final departure point for expeditions, and there is a statue of Scott (sculpted by his widow) in the central city. Christchurch International Airport serves as the major base for the New Zealand and Italian Antarctic programmes as well as the United States Antarctic Program. The International Antarctic Centre provides both base facilities and a museum and visitor centre. 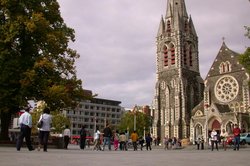 Christchurch has one full-time professional theatre, the Court Theatre. There is also an active recreational theatre scene.

Christchurch has approximately 35 cinema screens, with more planned in the next few years. While historically most cinemas were grouped around Cathedral Square, only the Regent complex remains there. The largest multiplexes are the Hoyts 8 in the old central railway station (Moorhouse Ave) and Reading Cinemas (8) in the Palms shopping centre in the suburb of Shirley.

Christchurch has a wide range of dance parties. Information can be obtained from cafes such as C-ONE on High Street. While most of the parties are either house or drum'n'bass, occasionally there are good trance parties.

A number of tertiary education institutions have campuses in Christchurch, or in the surrounding areas.